Can I use cookies for analytics? Would be nice, but it's also fine if you disagree :)

TL;DR
You don't have to spend a fortune, but it's a lot of fun to put a little money in your hand.

A friend had the idea for our podcast Techmob Show (german). I got one requirement before we would start the first recording: get a new microphone. During this time a colleague also stepped up his camera game which got me thinking. And so one thing led to another... 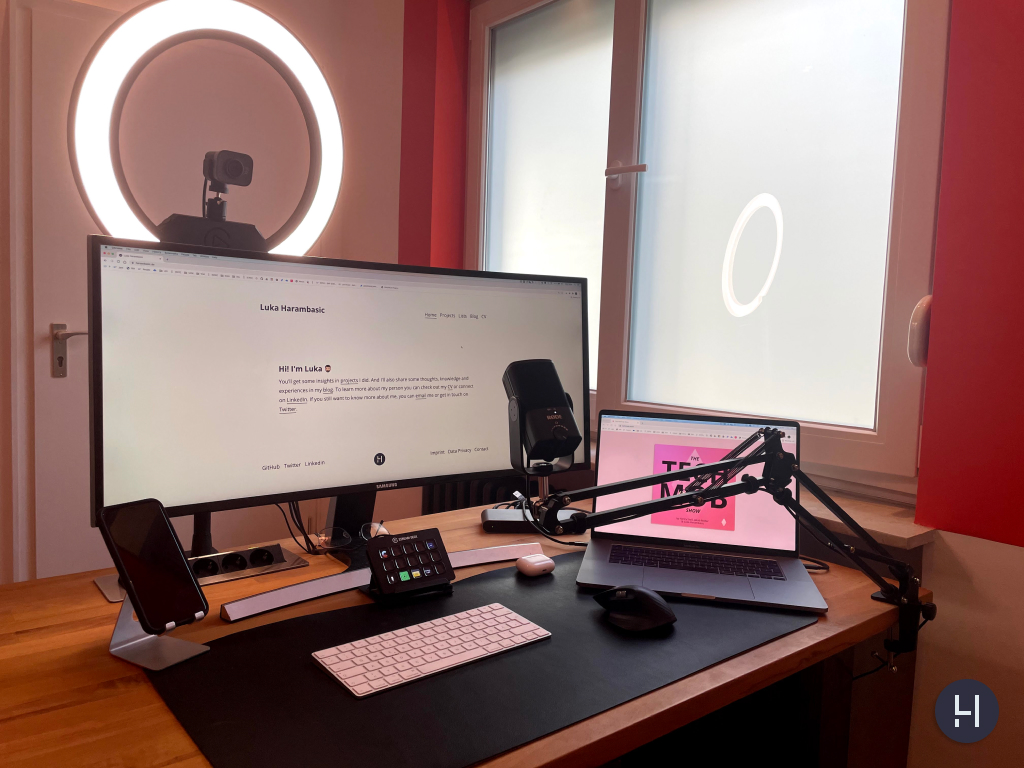 A lot of the following can be achieved a lot cheaper. But in this kind of area, I prefer plug-and-play solutions. Besides, that I had one hard requirement: USB-C. The hardware I bought should last some years, and I don't want to be annoyed in two years that I have to use a USB-A to USB-C adapter.

My setup has to work with my private MacBook 15" (Mid 2014) and my business MacBook 16" (2019). The ports are the major difference, basically from everything you need to USB-C. As I spend most of my time working at this desk I focused on my business MacBook which is connected to the Belkin Thunderbolt 3 Dock Pro Hub via one cable, which is quite convenient compared with the previous dongle setup. Mouse & Keyboard connect in both cases via Bluetooth. The 2019 MacBook connects to the Samsung display (Samsung SE790C Display) over the dock via DisplayPort, which leaves HDMI for the 2014 MacBook. That's my first widescreen display and I bought it used from a friend. If you compare it with Retina Displays you see a difference, especially at text. Staring at this display by consuming or producing text I really would like to step up this part of my setup. Overall a widescreen monitor is just nice and comes in very handy for Pull Request reviews.

Before I even bought the microphone I wanted to play with an Elgato Streamdeck to speed up some repetitive tasks. Alternatives to this would be an external number pad or the FreeDeck (Video). A friend of mine already used a Streamdeck, mainly for ABAP programming. He mentioned that it's only a gadget, though a nice one. After two months of use I have to admit he was right, but I use, it multiple times daily. Some of my most used actions:

All of this is still pretty basic and I would like to do even more with it.

One of the goals was to not spend a fortune but still have a significantly better quality than my AirPod Pros. I also wanted a stand as I wasn't certain if I want to spend extra 20 € on an arm, and I can tell you: get an arm for your microphone. Otherwise, it's quite annoying as it's always in the way, and you are too far away to get a nice audio quality. It's still nice to have a microphone with an integrated stand as I can change locations, which is relevant for our podcast recordings. With all that in mind, I went for the Rode NT-USB Mini and until now, I only got compliments about the sound quality. To be honest, 50% of the sound is the microphone arm, it just sounds more professional if you see this in my webcam image. If you don't need a built-in stand you should check out the Rode Podcaster. As an alternative, I would go for some wired headphones with a microphone.

I was quickly certain that I want a Ring Light as I don't want to do a full-blown light setup, and I like the look of a Ring Light. I may also have been influenced by the video "Elgato's new Ringlight. But for whom?" (german). Most cheap Ring Lights come with a Tripod and in my current setup, this doesn't make any sense. I'm also thinking about getting a height-adjustable table, so I only wanted to go with a table clamp. For me, someone who knows nothing about light, I was struggling to pay so much money for something banal like light. I went for this light because it was convenient, and I was pretty confident the quality will be right. As an alternative, you can use a reading lamp or turn your desk to your window so that you benefit from natural light. Or maybe the Razer Ring Light is something for you with 90 €.

Like most people in Home-Office I used my built-in laptop camera and to honest the first half of the year I never turned it on. In the meantime, my opinion changed and I think everyone should turn on their cameras. It still doesn't replace a real meeting, but it brings you a little closer. Most of the time the built-in camera is very unfavorable as it records your nostrils has a poor low light performance and a bad resolution.

My first idea was to use my smartphone, as it can record in 4K, and I always have it with me, and thanks to the Elgato EpocCam Pro App it's not even a problem. There is one thing I mentioned, in the beginning, I want a plug-and-play solution. Yes, this setup is straightforward, but I have to set it up multiple times a day, every day. That's not what I imagine, and I hoped to solve it with my next idea: using my GoPro Hero 8 Black. Also, this works okay, but the software to use your GoPro as a Webcam is very buggy, every morning I had to do some of the following stuff (in random order): restart GoPro, unplug the cable, restart the program, unplug & shutdown GoPro, start the program without the GoPro being connected. The image quality was good, and I gained the freedom to move my laptop wherever I want. Before this, it was positioned under my widescreen monitor, now he is to the right of my display.

During this time the previously mentioned colleague bought a used camera where you can apply different lenses. I have to admit his image quality is awesome, with a natural Bokeh effect. To achieve this, he had to hack his camera which runs Android 2 and that was something I didn't want to do.

With this, I had two options left: 1) a new SLR camera which can be easily used as a webcam 2) a top webcam. Option one starts at 500 € without a lens and option two ends at around 250 €. Having in mind that I use it mainly for video calls the decision was easy, but then I had to decide on a webcam. Three have been shortlisted: Logitech Streamcam (160 €), Brio Ultra-HD Pro Business-Webcam (240 €), Razer Kiyo (110 €).

I watched some comparison videos to get an understanding of the differences and to find the image I like the most and is worth the money. The winner is the Logitech Streamcam: USB-C cable (unfortunately firmly attached), mid-range price (got it for 120 €), 1/4" mounting thread.

Most 25 € Full-HD webcams would almost look the same on a small square in your favorite video call software, e.g. this one.

I had a lot of fun dealing with the topic so it was totally worth it. For now, I have the perfect setup for my requirements. All of this could be a lot cheaper, but this would require more tinkering and is probably not as convenient as this setup. Having a setup like this is for me mainly about fun. I'm still not a streamer or content creator who needs this. No matter how much you want to spend there are two small points you can always follow:

If you want to get a more expensive inspiration I recommend the video "Next Level Video Calls | Best Homeoffice Setup Money Can Buy" from Christoph Magnussen.

I only linked to the manufactures, most of the time it's more expensive than other retailers. So please check the prices :)
Thanks to all my colleagues and friends who had to endure me during the trial and error phase.
If you have any thoughts or questions feel free to share them in this thread or send me an email. And if you want to stay up to date you can subscribe to the RSS feed.
by Luka Harambasic